Anglian Water has a consultation ending on Monday 14th September to choose from 3 sites for its relocation of the Cambridge Waste Water Treatment at Milton. Up to £227million is allocated to Anglian Water and Cambridge City Council for the relocation, which will allow the current Milton site to be used for housing.
Milton Village is campaigning against sites 1 and 2 which are downwind from them. Fen Ditton is campaigning against Site 3 which is on Honey Hill, near High Ditch Road and quite near the Quy Mill Hotel. All three sites proposed are on green belt land. Site 3 would be the size of 30 football pitches and works access would be via the Quy roundabout.
The green belt land earmarked for Site 3 is also a site envisioned for the extension of Wicken Fen to the edge of Cambridge, to safeguard a more sustainable future for this unique habitat. https://nt.global.ssl.fastly.net/wicken-fen-nature-reserve/documents/wicken-fen-vision-strategy-document.pdf This is a long term vision but the possibility is lost forever if site 3 is chosen.
You can see the sites proposed here and give feedback before Monday 14th September:
https://cwwtprproposals.commonplace.is/schemes/proposals/1-view-our-interactive-map-and-provide-your-feedback/details
I was unaware of this situation till this week, and wondered if others were in
the same situation. I am saddened that all three sites use precious green
belt land, though of course there does need to be a sewage plant
somewhere.

And from Claire Daunton, our District Councillor

The move of the Water Treatment Plant (WTP) has been proposed to allow for the full development of the area around Cambridge North Station, a designated brownfield site, for  mix of residential and light industrial and office development. The site is large (160 h.acres) and of that area, the WTP takes up a very large amount of space. With its move, the site could accommodate ca. 8,000 homes.
Anglian Water has said that a new WTP would take up significantly less space than the present plant which was built in the 1890s.
From a long list of potential sites, Anglian Water has narrowed these down to three sites for the relocation for details consultation. They indicate indicate that each is in the green belt. One site is between Horningsea and Fen Ditton; the other two are closer to Milton, Waterbeach and Histon. The consultation website gives all the details of the exact location of the three sites and information about access. Clearly the site at Fen Ditton/Horningsea is closest to the Wilbrahams.
The sites have to be large enough to contain the new WTP, with landscaping round it and a 440 meter gap between the edge of the site and any domestic buildings.
Anglian Water has been meeting with parish councils in the villages most affected and as well in those close by, and has been holding question and answer sessions. Recently, representatives from the parish councils of Great and Little Wilbraham have attended meetings.
District councillors requested that the consultation period be extended to 14th September for parish council responses, and now Anglian Water has opened up the extension to all residents. This extension takes account of the fact that we are in full holiday period and that face-to-face meetings and thus in-person exchange of views cannot take place.
With the extension of time for the consultation there is now greater opportunity for residents to review the documentation provided by Anglian Water and to send in responses. Responses can be general but they can also deal with specific issues such as traffic; air quality; environmental issues; wildlife and biodiversity issues; sites of scientific or archaeological interest; questions of engineering; water quality and water usage.
The response form can be found on the site along with all the documentation.
https://cwwtpr.com
Claire Daunton. cllr.daunton@scambs.gov.uk 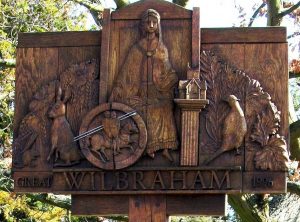