Walks around Fulbourn inc The Wilbrahams

Anglesey Abbey offers year round attractions in the garden, from the early snowdrops and winter garden in late winter to the stunning dahlias in Autumn.
http://www.nationaltrust.org.uk/article-1356403640538/

2. Routeways, Ancient and Modern: Fleam Dyke, Icknield Way, and a close up view of the A11

The walk takes between one and a half hours and two hours and is just short of 4 miles. It is easily found and is on generally well drained tracks. Boots are recommended however.

Getting there and parking

Drive to Anglesey Abbey, on the B1102 Burwell road, and park in the National Trust car park.

5. Parish of the Month-The Wilbrahams

This is information from the Ramblers Group leaflet from 2005.

A justification for putting Great and Little Wilbraham together, is that they were a single parish until the C13th.

The parishes contain low-lying areas of fen & alluvium, although most of the land is on chalk.  Around the village of Little Wilbraham, and at Wilbraham Temple, the chalk is overlain by glacial gravels.  A tributary rises near Wilbraham Temple, then forms the boundary between Gt & Lt Wilbraham. The open fields of both parishes were enclosed following awards ca. 1801, and the Commissioners were given power to straighten  the courses of the rivers and construct public drains,  although extensive areas of common survive near the streams.

There are 16 public rights of way in Little Wilbraham, 9 in Great Wilbraham, and several permissive paths, so there is a wealth of walking opportunities, both on low-lying ground, and on the relatively high chalk ground along Street Way.

A modest amount of walking literature exists, but some may be out of print.

a) Willows and Wildfowl – a 7 km walk through Wilbraham Fen, a leaflet publ. by Cambs.CC in 1995.  The walk starts at Frog End, Lt Wilbraham, and takes the cross-field path towards Hawk Mill Farm buildings, along the drive to the farm, then along the footpath beside Little Wilbraham River.  Approaching the A1303 near Quy Roundabout, it does not leave the fen, but turns right over a bridge on a permissive path, to another bridge giving access to the byway, Long Drove Way, which leads back to Frog End. Parking is easier in the layby on the A1303 than in Lt Wilbraham.

A lake once occupied Lt Wilbraham Fen, water escaping N over a gravel-tipped ridge at Quy water bridges, and into the Cam.  As the water level fell, peat formed, but a marshy pool remained until the early C19th. Peat level was higher before successful  artificial drainage in the C18th & C19th.

Of interest are Hawk Windmill, TL 535 583 used until 1936, but now residential, with just a squat, tarred tower with a cap and Hawk Mill Farm, dating from 1279, and whose watermill provided the wheel for the Cambridge Museum of Technology.

I would not recommend this route in Winter, as the paths are liable to flood.

b) Another leaflet in a similar format, Local Walks – Fulbourn, Teversham & The Wilbrahams, publ. by the Cambridge Green Belt Project ca. 1995, simply provides a sketch map of paths in the locality.

c) A leaflet, The Fleam Dyke Footpath, publ. by The Cambridge Green Belt team, ca. 1995, gives an excellent description of the pre-history and natural history of the Dyke, but only suggests a linear walk along its length from Balsham to Fulbourn.

This Anglo-Saxon defensive barrier forms part of Gt Wilbraham’s parish boundary, and I would recommend the following walk, suitable for Winter.  See also the  magazine of the Friends of the Roman Road and Fleam Dyke for points of interest along the Dyke.

Park considerately near Temple End, Gt Wilbraham. (Wilbraham Temple was in the hands of the Knights Templar in the C13th.  The oldest parts of the house surviving are C17th, built for Robert Huddlestone.  What a pity we cannot see this interesting place from any path!).   Walk through the village, passing the Axe & Compass PH, to Frog End, Gt.Wilbraham. (Note both Gt & Lt W have Frog Ends – confusing!).  Take the footpath, crossing the railway towards the start of Fleam Dyke. Go along the Dyke, passing Mutlow Hill tumulus, and cross the bridge over the A11.  On the other side, take the path beside the road, passing the continuation of Fleam Dyke. Continue on this path, behind a hedge, to come to a cut-off road, now a bridleway. Pass West Wratting Valley Farm, and on reaching the active chalk pit, turn left along the road. Cross the road-bridge over the A11, and continue down the road-verge to Gt Wilbraham Chalk Pit Reserve.  This area of trees & grass has a seat looking out over fields at the rear. Continue down the quiet road towards Gt Wilbraham. (8 miles)

d) A new path in Bottisham parish makes possible a circular walk from the Wilbrahams.  Park considerately near Church End, Gt Wilbraham. Walk to Little Wilbraham Church on the roadside footway.  Walk up the drive of the C14th church. Outside the porch may be seen the base of an old cross. The church contains a brass dated 1521, and the font is 500y old. Pass beside the church and into a wooded pit.  A narrow path goes forward, and climbs steps onto a grassy area with trees and a seat.  Exit over a stile. Turn left on Little Wilbraham Road, and left again into Primrose Farm Road. Go along a footpath fenced at first behind the “Hole in the Wall” PH .  This passes behind the rec., and continues across arable to Frog End. Take the signed path NNW behind the barn, cross Little Wilbraham Rd., continue across a field to TL543596, where turn right along a field boundary. Gain the road just before the bridge over the A14. Go forward to the A1303, cross, and turn left on the footway.  After 300m take the footpath to Bottisham, emerging near the church. Go through the churchyard, and take a path and estate roads to Beechwood Ave., then a signed path across fields to the Swaffham Bulbeck Rd, near Stone Bridge. Walk to Park End, and take the footpath ESE from the farmyard.  Continue to TL567613, where turn right on a new bridleway by a hedge. Follow this back to the A1303. Turn right, to cross the road, and pass the scrap yard to join the byway called Heath Road.  This crosses the A14 on the bridge – regrettably, there is usually rubbish dumped here.  (Do report this, if present, to the District Council).  Continue to a cross-roads of tracks at TL573587, and turn right along Street Way.  Cross the Six Mile Bottom Road, and continue along Street Way back to Temple End, and Church End, Gt Wilbraham.(9 miles)

e) Probably the “classic” walk in the area is that between Fulbourn & The Wilbrahams. The start is usually in Stonebridge Lane, Fulbourn, but for present purposes, begin at Church End, Gt. Wilbraham. Walk up the road footway to Lt Wilbraham, and take the footpath down the driveway past Hawk Windmill, and continue past Hawk Mill Farm on a earth farm track, soon between arable fields. At TL531580, old  signs, “Footpath” point both ways along the path, by a hedge.  At TL531576, a stile accesses Gt Wilbraham Common (worth a visit), but continue across the field to Coles Bridge. Turn right on the Wilbraham Road (care) , and take a signed route across an arable field to the rear of some grain silos.  A path runs between fences to emerge near the Fulbourn railway crossing. Walk towards the village, either turning off on a permissive path towards the nature reserve (well-waymarked), or continue to the village almshouses, to take the bridleway (left) leading to the reserve.  Either way, reach Stonebridge Lane, Fulbourn.  Follow the lane round, past the end of Fleam Dyke, then take the path across fields to join the Drove Way, which crosses the railway, and comes to London Road.  Turn left into Gt Wilbraham. (6 miles)

Little Wilbraham may be a small village, but the parish extends a long way, including part of Six Mile Bottom. The hamlet here did not exist until the coming of the railway in 1848. when some cottages were built. Lord Byron wrote “The Corsair” here.  There is an interesting path alongside the railway, which may be connected with the Street Way complex.  Other paths extend E towards Weston Colville.

f) Do investigate the inner-village paths of Great Wilbraham.  Toft Lane, from Frog End, is a site of early settlement.  There is a vast prehistoric, Roman, Saxon and medieval history in the Wilbrahams, too detailed to relate here.

Neither the author nor his dog accept any responsibility for accuracy or for any injury or mishap that might befall any person who follows this walk. First published by “one man and his dog” in Great Shelford Village News February 2003Li

For the more ambitious, a long distance walking route using fenland rights of way linking the historic centres of Ely and Cambridge.
http://www.britishwalks.org/walks/Named/FenRivers.php

There are also walking groups you can join:

The Cambridge Walking programme delivers a range of walks across the borough. The programme includes weekly short walks, one-off longer walks, tours that take in local history and visitor attractions, rambles and ambles for parents and children as well routes that are accessible for wheelchair users, pushchairs and buggies.

You can take walks at your own pace without worrying about being left behind. They are open to everyone, and are free of charge, so it’s a great way to be active, socialise and have fun.

2.The Ramblers- programme  Includes one to the Fleam Dyke 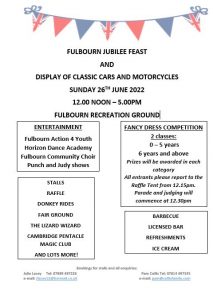