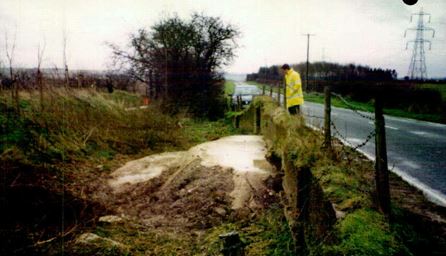 When you walk, ride or drive down Mill Road, have you realised that you cross two railway bridges before you reach the A11?

Yes, you can see the bridge over the Ipswich to Cambridge line, which is clearly marked by its parapets, but where is the other one?

On 3 January 1848 a new railway line was opened between Newmarket and Great Chesterford.  Unfortunately, the owners quickly found themselves in financial difficulties, and one complete track of the new line laid from Six Mile Bottom to Chesterford was taken up and used for the new Ipswich to Cambridge line.  Matters continued to deteriorate, and the line was closed to all traffic on 9 October 1851.  The Newmarket to Chesterford line had lasted less than 4 years.

A bridge carried Mill Road over the railway line

Although the line was closed that bridge, now 173 years old, is still there. Built of brick, it was designed for horses and carts, and may even once have carried a notice on each parapet forbidding anything over 10 tons to pass.  Now it carries 44 tonne lorries, or even 88 tonnes if two choose to pass there. To strengthen the bridge, it was filled with ‘cement foam’ in February 2002. 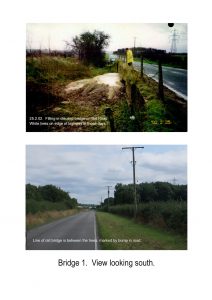 A photo, Bridge 1, of the work, together with the current view along the road, both looking south, is attached. 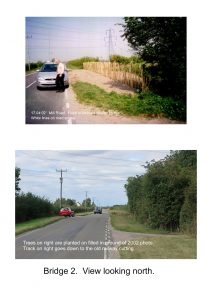 The work was finished by April 2002, and the photo, Bridge 2, shows the old cutting filled and made good, and the current view of the road, this time looking north. Those saplings have grown into a very high hedge.

Look at that old parapet in 2002, not in a happy state and made worse by a topping of barbed wire.  I doubt that it would have saved many vehicles, and it certainly did not stop villagers using the old cutting as a rubbish tip. There are stories of a consignment of gas masks being dumped there after the war.

The line of the old railway is easily picked out today by the line of trees on each side of Mill Road.  The bridge itself is marked by a gradual rise in the road and a slight bump in the centre.

The bridge is a tribute to Victorian engineering, but its unsympathetic cement filling is at best an attempt to solve a worsening traffic problem, one for which the bridge was not designed. I wonder for how much longer there will be two bridges under Mill Road.

This article could not have been written without invaluable help from Roger Burton.  Thank you, Roger. 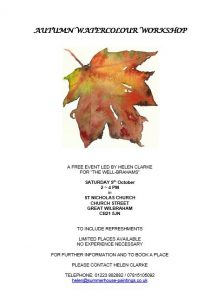